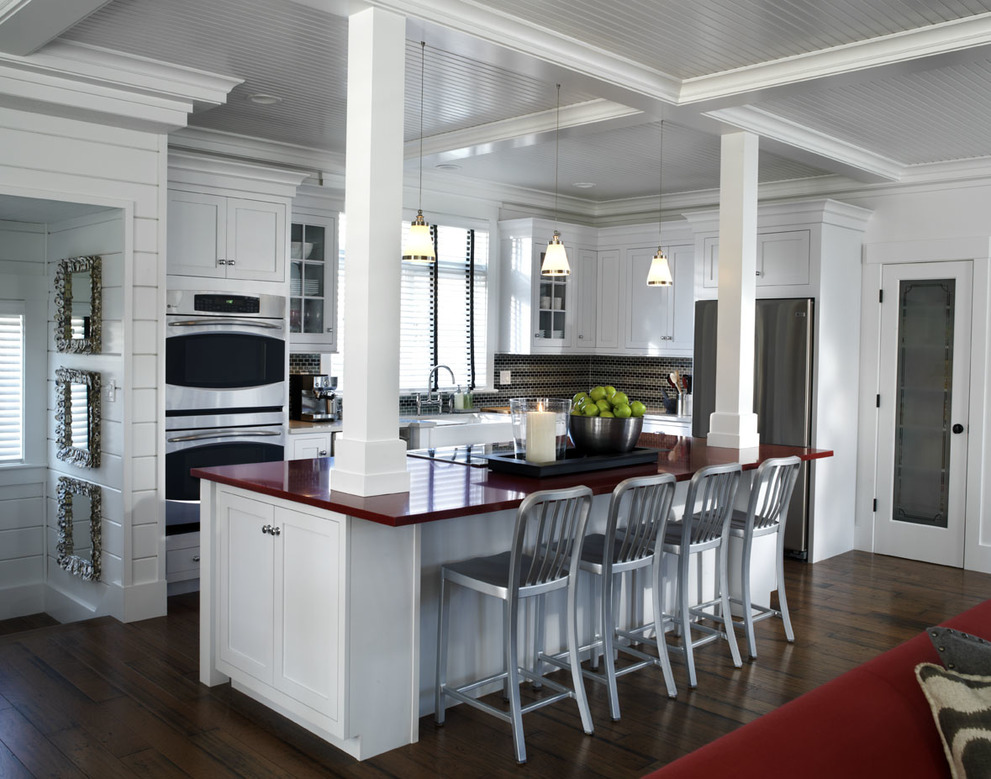 Real life design differs a bit from television show homes.
When Infinity Homes opened its HGTV Green Home to the public, lines formed down the street and around the corner. When street parking ran out, the builder ran buses from a remote parking lot. More than 20,000 people ultimately toured the house, paying $20 a head that went to charity. Dave Steinke, a principal with Denver-based Infinity, still can’t get over the response. “We had people drive in from Oregon and California. Some of them had seen every HGTV dream home.”

Dream homes broadcast to millions of viewers on home and garden television have fired the collective imagination of American home buyers. Many people now approach a new-home project with big ideas born from reality television for architectural features, technology, and finishes. They sometimes find out that executing custom details that make for good television is beyond their budget.

Dream homes broadcast to millions of viewers on home and garden television have fired the collective imagination of American home buyers. Many people now approach a new-home project with big ideas born from reality television for architectural features, technology, and finishes. They sometimes find out that executing custom details that make for good television is beyond their budget.

Infinity parlayed the publicity surrounding its time in the television limelight into a series of homes dubbed Lime – a reference to the green home predecessor – that it continues to build today. The modern, compact production homes differ from the original show home in enlightening ways. It turned out that most buyers didn’t want the dog wash in the garage or a fluorescent pink bedroom shown on TV. They wanted a more practical home with subdued finishes.

The biggest change made by Infinity was to delete a first-floor “Do” room. In the original plan drawn for the home, the space was used as a studio. The network asked instead for a Do room with a washer and dryer, space to wrap presents and sew, and a pull-out home office. Activity zones in the room were hidden behind sleek custom cabinetry so that the space could double as a sitting area. Infinity had to run plumbing to the room to accommodate the change.

When Infinity began marketing its Lime series, “no one wanted a Do room,” says Steinke. “They wanted a studio.” So, the builder went back to its original design. The studio proved an enticing place to escape within the largely open floor plan. The builder also moved the laundry room to the second floor, where it had been originally. It turns out Infinity’s mostly family buyers valued having the laundry close to bedrooms, where most dirty clothes are piled. Simple touches like a large master bedroom with sitting space to unwind proved especially popular.

Tony Green also used an HGTV green home to kick off a new series of cottage plans at The Pinehills, a large masterplan community in Plymouth, Mass. The show home, built by MacKenzie Brothers, featured a bevy of tantalizing green features – beefed-up insulation, solar panels, and a super high-efficiency water heater. The builder had to make double sure that people knew the energy upgrades wouldn’t be standard features in the cottage series. “As long as you are clear about what’s an option, people understand,” says Green.

Photo courtesy of The Pinehills

When Green opened negotiations with HGTV, he also made it clear that the home couldn’t grow in size. After all, it was supposed to be a cottage. As it turned out, most of the changes to the builder’s original plan involved energy upgrades. The show home achieved a HERS (Home Energy Rating System) of 50, a pretty high rating, Green says, given the builder’s modest investment in additional energy details.

The show home featured some memorable interior details -- red countertops in the kitchen, a red sofa in the living room, and an interior pattern that centered on squares and squares.

Photo courtesy of The Pinehills

Manufacturers often donate or pay fees to be included in high-profile show homes. That’s a good thing for the builder, Green and Steinke agree, since it often exposes them to new suppliers who bring tantalizing new products to the project. But builders often go back to using their regular suppliers for subsequent homes. Problems may arise if buyers ask for products featured in the show home that the builder doesn’t regularly use.

Infinity eliminated several other design features that it found buyers didn’t value. It limited the use of limestone to the front façade, instead of running it around the sides of the house. The dog wash in the garage, which required separate piping, was eliminated from the plan. For the television show, the designer asked for sliding panels to conceal the television in the great room. While a nice touch, the panels didn’t pencil out in the home offered to the public.

Despite the hard work required to design and build a home for television, both builders would do it again if given the opportunity. “I’m glad we did it,” says Steinke, who shudders to think how many person-hours the company devoted to the project. “We turned the experience into a series of homes that has been very good for us.”