Lessons from a Manor: Why it Pays to Sweat the Small Stuff 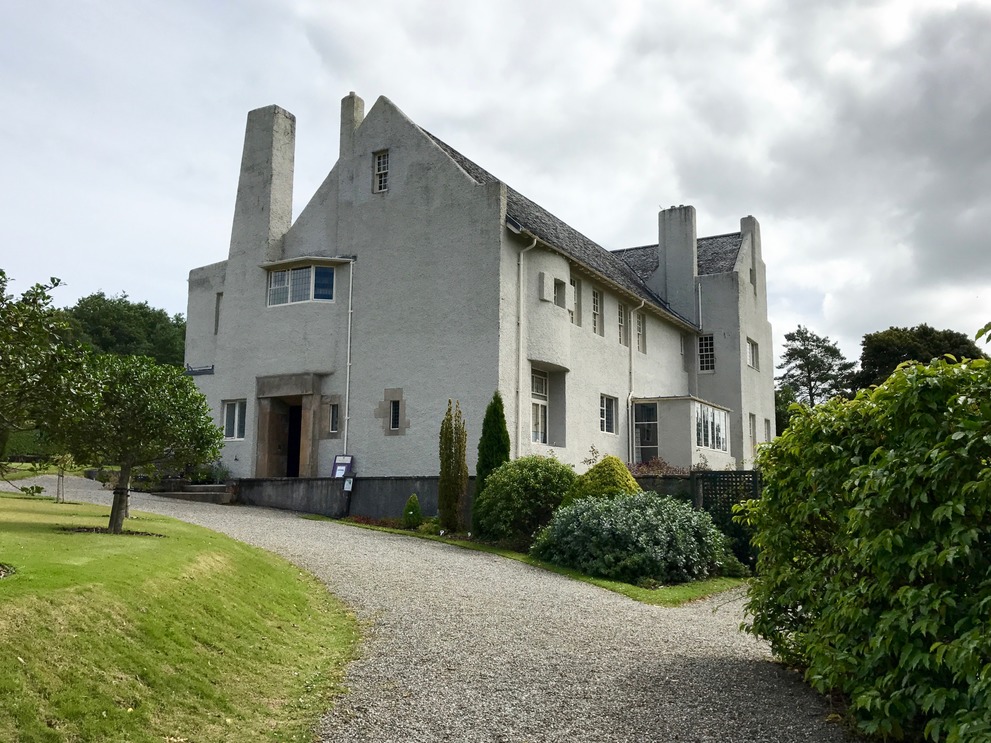 The Hill House, built by the great Scottish architect Charles Re
Sun lights rooms differently at different times of the day. Molding, door, and hardware styles establish interior patterns. Ceilings, walls, and floors create lines that influence the dimensions of space. Furniture, light fixtures, and furnishings dramatically affect the ambiance and functionality of rooms. These forces are at work in every home design. The question is whether you want to harness them or let them fall to chance.

The great Scottish architect Charles Renee Macintosh orchestrated design details to symphonic effect. Looking at his work in books and on the Internet is one thing. Walking his homes – as I had to the occasion to do recently on a visit to Helensburgh – serves as a reminder of how disparate details can come together to form a magnificent whole. Every small decision – the shape of a hallway light fixture, the pattern in a carpet, the size of a fireplace – ultimately becomes part of a larger scheme that affects the image of your home.

Macintosh, a contemporary of Frank Lloyd Wright, though they never met, took this exercise to another level. A devotee of the Art Nouveau style that spread across Europe in the early 20th century, he also pioneered development of a new Glasgow style that fused contemporary and traditional influences, including the castles that dot the Scottish landscape. Ultimately he synthesized these forces in a magnificent whole that was all his own.

The Hill House, built on a hillside for a publishing magnate Walter Blackie in 1902-3, may be the architect’s masterpiece. Blackie asked Macintosh to refrain from “adventitious ornamentation” on the exterior and to look to Scottish history for inspiration. Macintosh delivered a spare form with modern massing. The house soars from its site with turrets, chimneys, and windows that borrow from Scottish castles.

Blackie thought Mackintosh ignored the placement of windows; they do seem unordered at first glance. But the architect purposely put them in random places, just like you might see on a castle. A seemingly stray window greets visitors at the front door, the stucco siding around it cut away to reveal concrete blocks. The detail reveals the Scottish practice of harling – putting a long-lasting finish on a stone building. Concrete blocks return to frame the entry door, hinting at geometry within the house.

Black pine panels that resemble tree trunks line the front hallway. They alternate with wall panels stenciled with orchards. Four steps separate the entry vestibule from the main hallway, which doubled as an alternate living room, with a table in the middle and seating along the wall. Lanterns designed by Macintosh feature a motif based on the seed of the honesty plant. The same pods shows up in the wall stenciling. And the square pattern announced at the front door appears in the hallways’ carpet, light fittings, and chairs.

Macintosh used wall colors to denote different regions within the home – black in the male domains (the dining room and library), white in feminine spaces (the drawing room and main bedroom), and green in rooms occupied by servants (the kitchen and storage rooms). Glass door inserts shine purple light into the male rooms, pink light into more feminine rooms.

Only two rooms at the Hill House – the drawing room and main bedroom -- retain the furnishings designed by Macintosh and his artist wife, Margaret Macdonald. The floral pattern on the drawing room walls elaborates on the frieze pattern in the hall. Silver foil trunks separate stenciled rose patterns, with stray petals scattered about as if blown by the breeze. Niches on each side of the door were originally designed to hold vases for roses to scent the room, reinforcing the indoor garden perception. Today they house switches for electric lights, which were added later.

Black and white furniture, with floral and color inserts, compliments the room’s color scheme. The rose petals are repeated in the built-in window seat. Mother of pearl and floral inserts accent the room’s dark furniture, including a magnificent winged writing desk designed by Macintosh for Mrs. Blackie. The national trust that owns the home bought back the desk back at auction in 2002. Macintosh didn’t design the piano for the room, but he did give it new legs to make it look more like it belonged.

The drawing room illustrates how furniture dramatically influences the perception of a room. This chamber shines in comparison to the dining room, which was mostly decorated with pieces the Blackies brought from a previous house. Here and in other rooms Mackintosh did his best to design around furniture that was foreign to his design conceit. Picture rails in the dining room and elsewhere create a human scale in rooms with tall ceilings. The rails combine with molding over windows and doors to create unbroken lines.

This attention to line is on magnificent display in the main bedroom. A headboard behind the bed continues the line around the room. It also emphasizes the barrel vault over the bed. Two black ladderback chairs, which separate sleeping from other functions within the L-shaped room, suggest trellises that support the roses stenciled on the walls. Mrs. Blackie used the white painted wardrobes to store her clothes. Upholstery on the fireplace settle suggests thistles, the Scottish national flower.

The architect considered the home’s solar orientation before he laid out the floor plan. The main bedroom mostly faces west so that parents could enjoy the setting sun. The children’s bedrooms mainly face east to catch early morning sunlight. They are within a “windsbreath” of the rose garden and wild flower orchard. The location of the bedrooms suggests the cycle of life. Guest bedrooms face south, so that guests could linger longer in bed. The main public rooms are also on the south side, where they benefit from warm sunlight – a key consideration in cloudy Scotland. They provide magnificent views of a garden, a sloping lawn, and the River Clyde in the distance.

If the home reaches the realm of art, it is also rife with practical built-ins to facilitate daily life. A shelf inside a kitchen bay window was designed to cool pies. Built-in window seating along the second-floor hallway provides the perfect perch to do homework, though the Blackie children used it to stage plays, storing their costumes in built-in shelving.

An alcove cut into the stair landing allowed the children to spy on guests. A cupboard under the stairs in Walter’s bedroom stored toys and books.