“You should not have to spend a lot of money to get something well designed. I like the challenge of adapting mass-produced items to suit particular needs.”

Robert holds a Master of Architecture from the University of Washington. His award-winning residential designs have been featured in Sunset magazine and Sunset books, SF magazine, Los Angeles Times magazine, American Homestyle & Gardening magazine, Creative Homeowner magazine. Architectural Record's Greensource magazine is publishing one of his designs in January 2009. He balances an imaginative contemporary approach to design with a practical understanding of construction; and he knows how to stretch a budget without compromising quality. He received the Grand Award for Sustainable Design from the American Institute of Architects /California Council in 2008. Robert's exclusive "Palomino" plan draws inspiration from mid-century modern Eichler subdivision houses – in fact Robert and his wife Carrie and their two young sons live in one. His new plan updates the Eichler idea with such eco-friendly elements as low-e glass skylights, a roof that's composed of 10.5 inch-thick Structural Insulated Panels (SIPs) and is designed to support photovoltaic panels, and a fireplace insert instead of a conventional wood-burning fireplace (note that such units do not require a chimney).

For a description of how Robert updated his own Eichler kitchen on a tight budget visit http://www.marinij.com/lifestyles/ci_10395829.

Tip: Adapt prefabricated cabinets from Ikea for a custom modern look that's affordable. For his own kitchen, Robert says: “I wanted a tall cabinet with drawers in the lower half and doors in the upper half, but Ikea doesn't do that so I simply stacked two wall cabinets over a base cabinet with drawers. It looks and works terrific and holds a lot.” 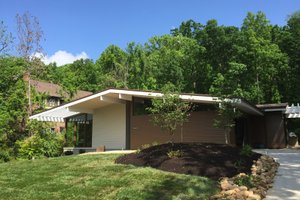