They're Building Our Farmhouse Floor Plan

Greg and Melissa Perry are completing their new hilltop home on 140 acres in rural Oklahoma -- it's our 3 bedroom 2.5 bath Plan 888-1 by Nick Lee.


See how close the Perry's house is to the rendering below -- they are almost identical!

Greg said they would paint it red and white just like our example -- and they did!

Melissa told me: "I spent weeks searching for the right plan -- probably a couple of hours each day." They wanted a farmhouse style with three bedrooms that would complement the rural setting, with ample porches for sitting out and enjoying the view. Melissa saw this plan and it felt right -- she showed it to Greg "and 45 minutes later we had chosen it."

Greg owns his own construction company, True Steel LLC, a large steel erector/fabricator that has built millions of sq. ft. of commercial and industrial projects, from Wyoming to Delaware. He started the construction of the house in April but admitted he keeps pulling workers off the job to work on other projects so that has slowed things down at times.

Every plan needs to be modified to suit the owner's needs and this project proves the point. The Perrys put a concrete safe room where the master closet is -- since this house is being built in tornado country -- which meant compensating for the loss of that space by expanding the master bedroom into part of the porch.

They turned the upstairs space into a game room -- according to Greg it will have a a pool table with old pictures on the wall and an old fashioned coke machine that serves ice-cold cokes in glass bottles: "I'm getting excited just talking about it right now," says Greg.

They turned the built-in desk near the stairway called "The Pad" into a walk-in pantry; replaced the fireplace with space for a giant flat screen media center; and added a coffee bar, among other tweaks. They also had to find room for mechanical systems including four air conditioners and two hot water heaters. [Top photo courtesy Melissa Perry]

Here are some new renderings of the interior.

The kitchen island functions as a long eating bar.


The living room soars to a height of 24 feet -- Melissa says they are installing a large ceiling fan from Big Ass Fans.

Here's a view of a bedroom beside the porch. 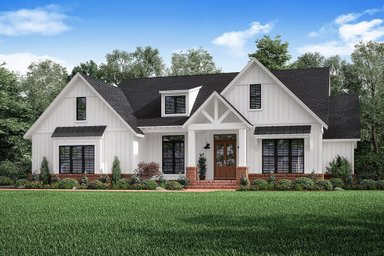 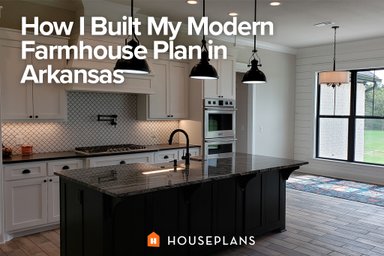 How I Built My Modern Farmhouse Plan in Arkansas
Explore real photos of this modern farmhouse plan. 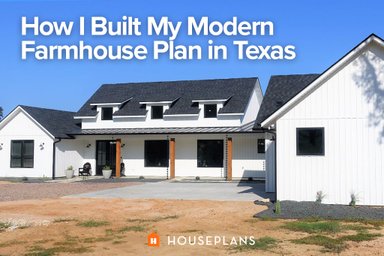 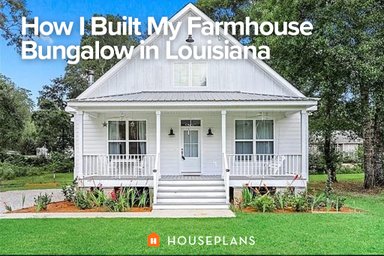 How I Built My Farmhouse Bungalow Plan in Louisiana
Enjoy real photos of this farmhouse bungalow.