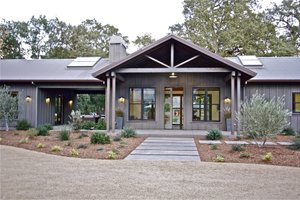 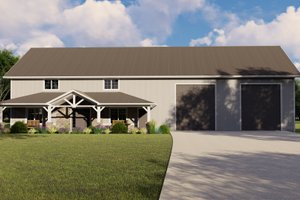 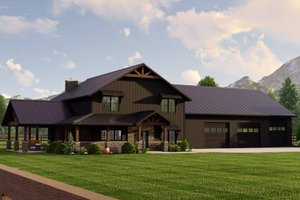 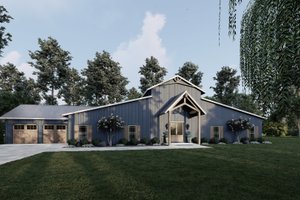 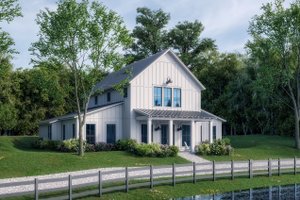 Have you heard about barndominium plans? These rustic designs take the traditional look of a barn but with modern, open floor plans to create contemporary living spaces. Most of our barn-style house plans feature traditional wood framing, but architect David Wiggins recently created a true metal-framed barndominium house plan. What does that mean? Potentially a faster, easier building process.

Architect David Wiggins recently designed this gorgeous metal-framed barndominium house plan, a first for him. So we sat down to ask what makes this such a special design, and how it’s different from wood framing. Wow, did he deliver! Below are some highlights from the conversation, condensed and edited for clarity. 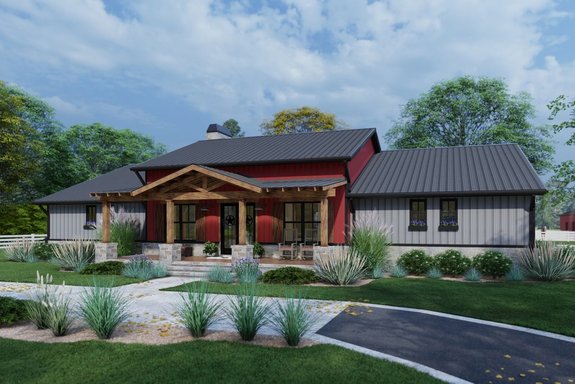 Plan 120-274 showcases a sleek, modern exterior. This metal-framed barndominium is the first from architect David Wiggins. He teamed up with Mueller, Inc., a Texas-based metal-building supplier.

What is a barndominium? This is a term that I think most people hadn’t even heard of 18 months ago. How do you define a barndominium and do you think the definition has changed? 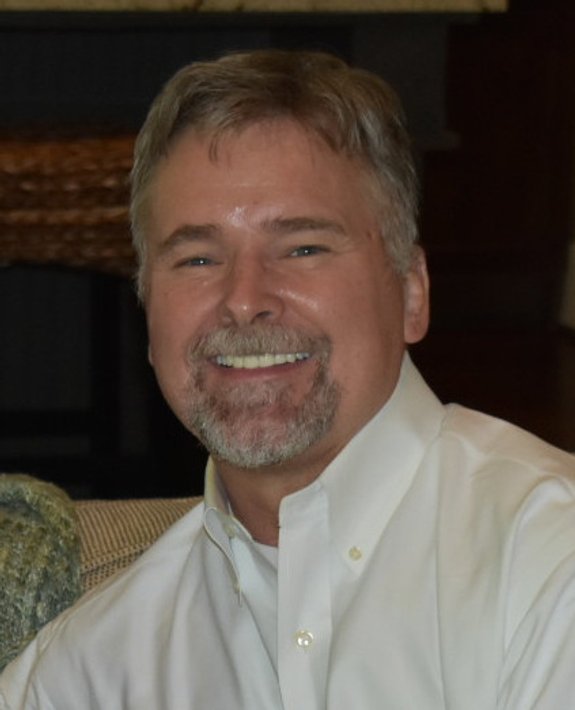 Well I’m trying to change the definition, actually, that’s what this whole exercise is about, because when I first stated exploring the idea the thing that struck me was that they’re not attractive and you ask yourself why, and as I studied them the reason why is because you take a metal building structure most of the time and you start with whatever their most efficient layout is and you work the architecture onto that. 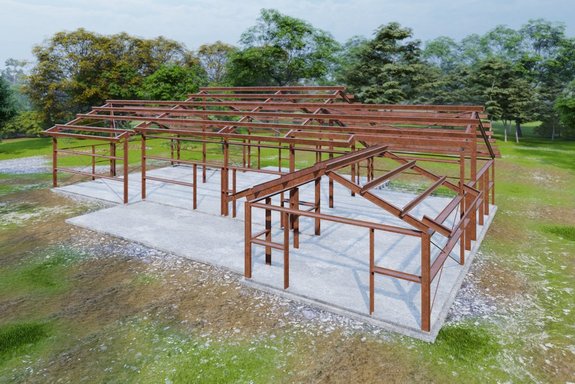 The design 120-274 uses metal framing instead of traditional wood. All images courtesy of David Wiggins.

Would you define a barndominium as a metal home, traditionally, a metal building that has living space in it?

Do you think most people understand it that way?

Yeah...I think they understand it as something that, because of that fact, it’s going to have a more utilitarian look as opposed to a residential look and that’s what I was trying to pull into it.

A key part of that is to follow the rules because you can create anything in a weld-up structure metal building but that doesn’t mean it’s going to save you money or be cost-effective to raise. You can do the weld-ups…if you go onto Google and search barndominiums you’ll find stuff that you’ll be thinking “wow, you can do this with a barndominium?” and it looks so residential and it has metal components in it for structure, yeah, but is it really the kind of thing people are looking for to save money and build a cost-effective house? A lot of those cases are not, they’re maybe even more expensive than conventional framing. Following the rules is the important part of that, following the rules of the metal building manufacturer, what they feel comfortable doing. Because you can weld up anything you want, you can take any one of my stock plans and say “let’s turn that into a barndominium” and make metal posts in it and metal roof framing, but it’s a custom, totally custom thing.

Prices for homebuilding materials, especially lumber, are soaring right now. How can someone building their dream home keep costs down?

Well, I’ve heard a few numbers…I’m not totally up on the numbers, but I’ve heard a few clients throw around a few things. That lumber is probably about triple, as much as triple what it cost a year and a half ago. And I’ve looked at some data online, some bar graphs and stuff to kind of confirm that…metal is going up too. I’ve talked to a couple of metal building suppliers and they say that metal is going up as well. One of the key components in wanting to do a metal building though isn’t just the cost of the material it’s going to be the cost of labor.

[There are] two different kind of metal buildings, there’s bolt-up and there’s weld-up. You can do pretty much anything you want with weld up, but with bolt-up that’s where we have to kind of start following the rules a little bit better and keeping the structure simple but a bolt-up is something that can be created, manufactured in the shop and then dropped on your site. And if you’ve got equipment, you know a front-end loader, or some kind of a lift, you can rent lifts, anybody can put this thing together, you can follow the manufacturer’s guidelines and bolt it together.

You don’t have to have any special trades, welding, framers. And the ease of which you can get a shell of the building, it’s not just the steel frame, it’s the components that go on the frame as well, because those are standardized, they’re in sheets of metal and sheets of insulation, and they all go on, they’re cut to link, so all you have to do is set them on and screw them in. So the construction of getting dried in is a lot faster than conventional frame, where it might take a month to get dried in with conventional framing. The metal building goes up much faster. So that’s money too.

So the bolt-up is generally easier to construct because the holes are already there. You just line them up, you put the bolts in, however you might have a few areas where welding is required, such as around the window framing, is that correct? 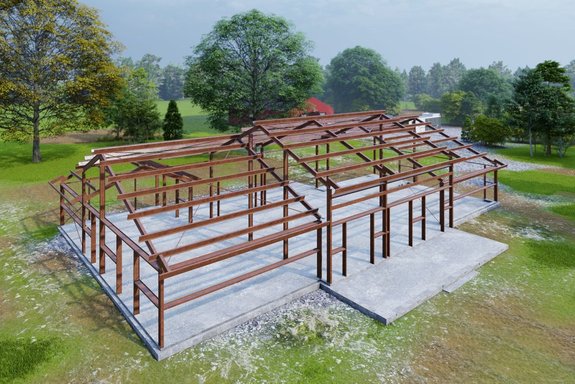 The metal framing is designed as mostly "bolt-up," which is easier than "weld-up" to construct, according to the designer. Consult with your local metal-building manufacturer about their processes.

However, weld-up is harder because you have to have these welded connections, you might have to forge to fit and to fasten, therefore it takes more a specialized labor and is more difficult, is that correct so far?

It can be if you don’t have a welder. Now what I’ve learned with the few people that I’ve talked to so far, is that, I kind of had this presumption already, that the type of people that are going to be drawn to the barndominium in the first place probably are going to be people that if they don’t themselves at least know somebody that has these skills anyway, they might be calling them in to help them weld it up anyway. 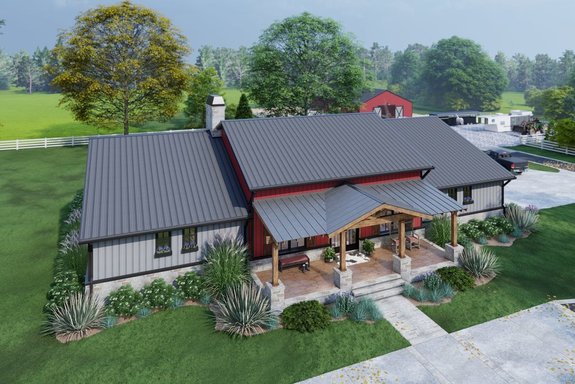 The back of the home features a large covered porch for spacious outdoor relaxation.

What are the pros of building this kind of structure and what are the cons?

The pros are obviously how quick and easily you can construct the building. It lends itself to a lot more open space. All the interior walls become non-load-bearing, so you can open it up a lot more. And design trends these days are really going that way, there’s less portioning off of space, you see a lot more openness between kitchen and dining and family. And so you can do that without having to add any additional structures or beams.

It’s going to be more energy-efficient too, or has the potential to be more energy-efficient, because the trend now is, we used to always put insulation in the ceiling, so that the attic became this really hot space, and they found that the attic being an extremely hot space isn’t necessarily good to have it against the interior spaces. Not to mention that you’re running all your ductwork through the hot space.

So it’s popular to put the foam insulation in the rafters so that your attic is actually cool as well. So that’s the way a metal building naturally is, you put your insulation right up against the roof and it makes the whole space cooler, I think, and more efficient, depending on how much insulation you use.

How about the cons?

I can’t think of any cons [laughs].

Is it cheaper? It seems like that’s a major motivation here, but you’re questioning that, if it’s the more complex weld-up.

If it ever was cheaper it’s going to be now. I don’t have any real data to be able to say it is cheaper, my gut feeling is that it is definitely cheaper now. The labor’s going to be, I think it’s definitely going to be less too because it just goes up faster.

How does a regular customer go about finding somebody to build this for them?

There are metal building suppliers. And Mueller, for instance, also supplies metal for metal roof for any residential project. They’ve done a few of my houses, in fact…for just the metal roofing part. Mueller is located in Temple, which is right in Central Texas, so they sell a lot of agricultural-grade things, where people just need, you know, square barns, or standard sliding doors or roll up doors, or something like that. And there’s a lot of companies in Texas that do that. And there’s everything in-between, from selling standard components to people who do nothing but custom weld-up and supply the steel or the labor for that.

So how about obtaining financing?

I think it’s going to depend on the lender. I think it’s going to depend on their position and what kind of equity the customer has to put into it. I think the type of client that might be looking at this is somebody who possibly already owns the land, maybe a good bit of land. So if they’ve got that to put up against as part of the loan, I don’t know why the bank wouldn’t jump on that. I have heard, though, that they do take kind of a critical eye to metal building structure as a home, but I think it really has to depend on the context. If you’re trying to do that in a neighborhood, I think I’d have a critical eye to that too, as to what’s the resale.

Why is that? Do you think there’s a perception that it’s cheap?

How well it fits in the neighborhood. There’s HOAs that would totally not allow that.

So you think the person who likes this probably already has land, what else?

I think they may see this as an opportunity, this is going to be a lot of the do-it-yourselfers, that see it as an opportunity, you know you’ve heard the stories of people who want to build a basement and live in their basement while they finish building the house or put a trailer up on their lot while they’re building their house and they’re doing it themselves. So this is an opportunity to kind of shortcut those methods and get a shell of a building up. So you could potentially live in a portion of it while you’re building, and once you’ve got it dried in, and that happens very fast. The overall shell of the building is something that a do-it-yourselfer could do, you don’t have to bring in a lot of trades.

You think about conventional construction, that to do the shell of a traditionally-framed house, you have a number of different trades: the framers, you have roofers, trim carpenters, somebody to install windows, somebody to do the masonry and the siding. All of that stuff is a standard component that comes with a metal building. They send it out in one trip and it just has to be put up. The roof is screwed down, the walls and siding are screwed down, all the trim is just screwed down.

In recent days there’s a lot of talk about lumber futures prices dropping, though it's unclear how long it will take for consumers to see lower prices. Do you think metal-framed homes will still be hot when lumber becomes more affordable?

Good question. I do. I was asked to help a friend design a barndo about 10 years ago. It was efficient then, I think it will remain so. It wasn’t as attractive (architecturally – that took some work to figure out), and the market (or designers) wasn’t/weren’t really ready for it then. I’m hoping banks/appraisers/HOAs will get on board with us too. 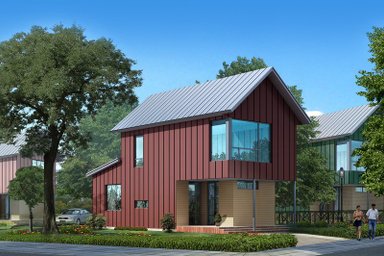 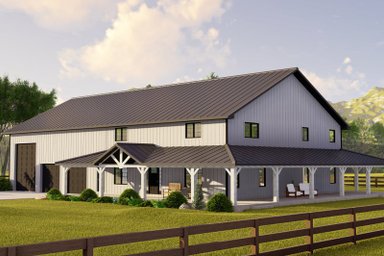 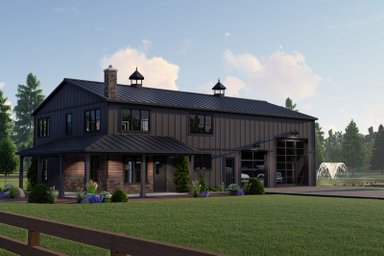 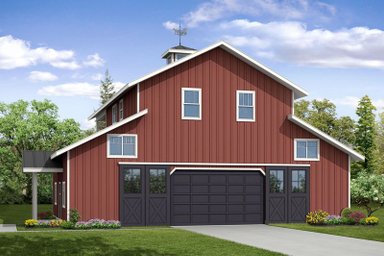 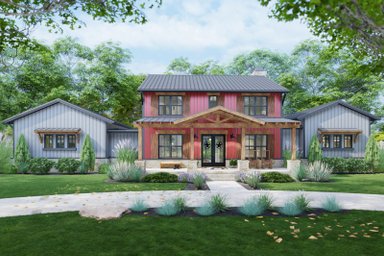 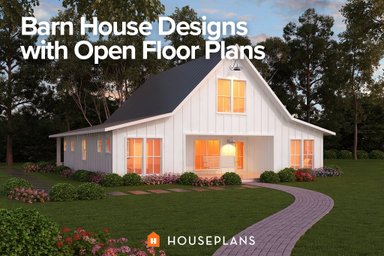