Houseplans.com customer Nina Ashton built a stunning ranch home in Florida that we can’t help but gush over. Simple but full of great details, plan 449-16 (pictured below) encourages ease and function with open flow between the kitchen and great room. Want to know more about Nina’s home building process and budget? See her interview below.

Click here to view our collection of Florida home plans. 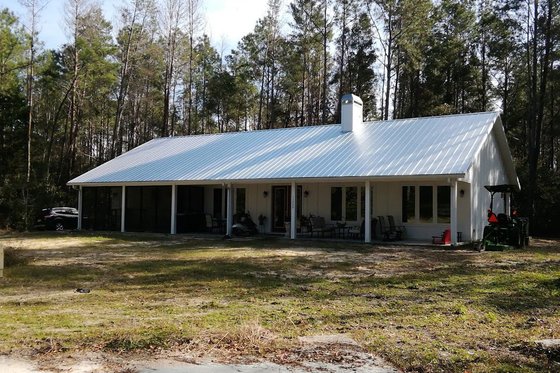 Why did you want to build your own home?

I spend a lot of time at home because of poor health so it was important to me to have a place I loved to be in. I found buying the location and then adding the house was easier than finding a used house I liked in the right location and them remodeling. I also did not want to buy someone else's design decisions and then spend money to rip them out to redo them. I think renovation is more stressful than new construction.... So many unknowns behind those walls. I also wanted it new so I wouldn't have as much maintenance in the next 30 years as an older house will.

What was your budget going into the process?

I was hoping it would cost less of course! I was fortunate that I had inherited money and was going to sell a house that was paid off and worth $400k. So I knew I had enough to do it even if there were financial surprises. But this is my last home, so I wanted it my way within my own self-imposed budget.

In looking at the plan and estimating $100sf for the air conditioned area and $50sf for the open porches, I guesstimated $250,000 for just the house. I went low on the numbers because I did not plan on any extravagant finishes. The builder even initially said he guessed $250k.

I was using stock windows that were not name brand, but were double glazed. I was doing a metal roof ....which was an upgrade. I did all tile on the floors, no wood. My bath fixtures were chrome Moen and the wall tile was $1.50sf Dal subway tile from Home Depot. I even used the least expensive white Corian for countertops through Home Depot. The cabinets were painted, but were plywood not particle board. I did splurge on the interior doors choosing wood not Masonite. I did splurge on the insulation. I got the blown in cellulose in the walls and the spray foam on the attic ceiling so the attic is conditioned space. The melamine cabinetry inside was an upgrade from wire shelving I could have chosen. 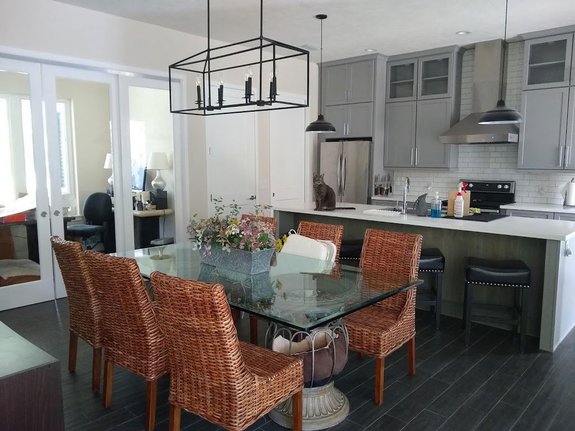 Check out her cool kitchen.

How much did you end up spending?

A lot more than I expected...the contract to build was $325,000. I think it increased because we were starting just after hurricanes Harvey, Irma, Maria. It was a shock. Especially after the builder guessed $250k himself. I was pretty annoyed, but as I was living in a dilapidated mobile home on the property which really was condemn-able, I had to get the place built. And I had already spent the $5000 for the CAD blueprint work, so I was stuck really. If the designer would have shared the CAD file, I would have been able to shop the house easier and maybe save some money.

Aside from the contact price, I had already bought the 6 acres of land for $40k....it had electrical service and a well already. The total contract cost included a $4000 septic system in the contract which will be different regionally. The plans from you were $1000. The redesign fee to put the plans on CAD and modify them to meet Florida code was $5000. I wish the CAD file had been available from the designer. It would have helped tremendously. I bought the appliances myself for $5000 on top of the contract price. There were some small change orders like additional $2000 for fill dirt.

What was your timeline and how long did it actually take?

They really were on top of the scheduling. That was the advantage of using this established builder. All the subcontractors like working for him. It took 7 months....from Nov of 2017 to May of 2018. There was a delay of a good month... partly it was the tile on the floor as the installer had a scheduling conflict and Home Depot took forever to get out to template for the counter tops. 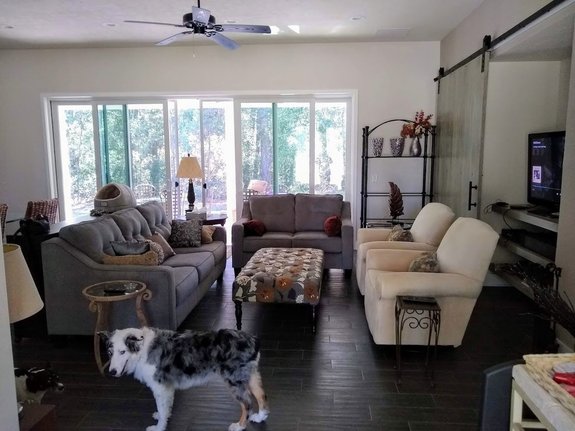 A view of her living room (and adorable dog).

If you could do anything differently what would it be?

I might have had the plans drawn up by an independent draftsman and got the engineering stamp....documented all my finish choices and put it out for bidding. Instead I just picked a builder to do the entire thing. I don't believe he tried at all to save me money. I think he just sent the plans out to his regular trades and whatever price came back is what he charged me. Same with finishes. I don't think he shopped them to try and get the best prices. 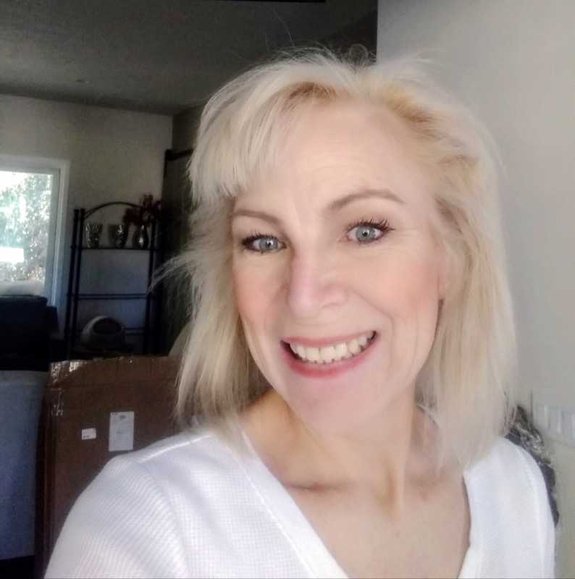 Nina Ashton in her home in Florida.

What did you learn from this experience?

This was not the first custom house I have built. But this time, the ability to see the rooms in detail through CAD increased my comfort level that I could see it in advance. Even the drawings on your website helped improve the process. The other thing I recommend is doing what you can in advance, like pick your finishes, so that I reduced the stress level when the ball starts rolling. 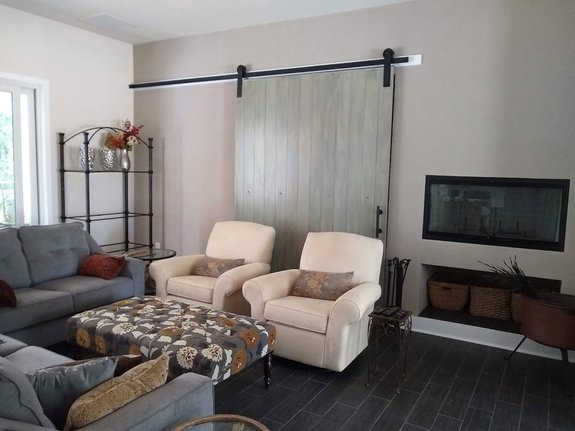 A wide sliding panel on an overhead track can be positioned to hide the TV when wanted or act as an accent feature when pushed off to the left for TV viewing.

Who was your builder?

The builder was Robinson Renovations and Custom Homes in Gainesville, FL.

They are a well-established company started back in the 1950's in this area by the father of the current owner. It is being passed to his son eventually. They had one person who does the estimating and also the computer blueprints named David, who was the star in my opinion. He remembered all the discussions we had and kept impeccable notes. It was working with him that gave me the most confidence that my directives would be properly documented and executed. The most important place to have all the details is right on the blueprints. Not in the accompanying contract or design sheets. The workers in the field only have the blueprints and you want little notes and elevations on that blueprint because you can't be there all the time and the workers won’t ask you for clarification.

This builder has you specify every finish you want from an online source and save it to Pinterest in a joint file with them. We would review them on a mounted computer screen at the end of a conference table at the few meetings we had. He also asked for a design board on Houzz or Pinterest of "looks" that I was seeking....i.e. how I wanted the final vanity, sink, faucet mirror to turn out which was shared with their staff. 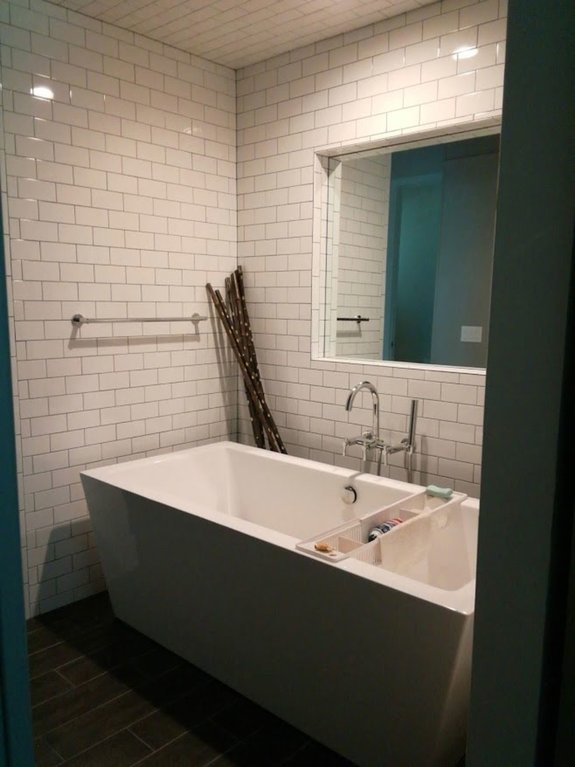 The bathroom in plan449-16 features both a standing shower and soaking tub.

Did you make any modifications?

I did not modify the floor plan at all except that the ceilings are 10' throughout instead of stepping up to 12' for the living area. I did not do the 16' "Nanawall" accordion slider in the living room. It's just a 4 panels of 4' each sliding doors. I did a plain wood burning fireplace instead of the $2000 gas liquid gel on the plans. The other way I saved a lot was not doing the cabinetry built- ins throughout the house. Every bedroom, the office, the entry, the laundry room....on the plans.....were built in cabinetry with matching drawers etc. Instead I did melamine shelving inside the closet with wooden sliding doors. I did not do the cedar trim on the porches and overhangs specified in the plans I used black plastic lattic on the front porch "owners entrance" instead. I did not do the exposed beam angled ceiling with the tongue and groove paneling on the porch ceilings. Instead, we made the ceilings on the porches flat green drywall and plaster which saved a lot.

How I Built My Dream Home in Florida for $367,000 Inspiration