Easygoing and popular, mid century modern house plans are enjoying a comeback. The design of these post-WWII homes was supposed to point toward the future, not become a desired object of the past. But with their accent on sculpted interior spaces and seamless connections between indoor and outdoor spaces, the best mid century modern home plans deliver a captivating lifestyle that still has traditional home styles playing catch up.

Several designers in the Houseplans portfolio sell updated versions of mid century modern house plans that are worth investigating. It would be tough to replicate the design of the original homes, built when codes were lenient to non-existent. Today’s energy codes make it difficult to use the copious amounts of glass found in the originals. While the form of these homes appears simple enough to build, many of the details (particularly the junctions where different materials met) can be expensive to execute. And the intimate connections between the home and natural landscape may require a special lot or landscaping plan.

The best mid century modern home plans appear to grow organically out of the ground. The effect stems in part from a strong horizontal orientation. Low-slung roof lines mimicked the slope of the land and worked in harmony with horizontal siding and window patterns. In the days when land was cheap, homes could ramble across a lot, embracing natural features. Home designers often worked closely with landscape architects to strategically frame exterior views. Aficionados say the homes had an exuberance and attention to detail missing from many homes today. 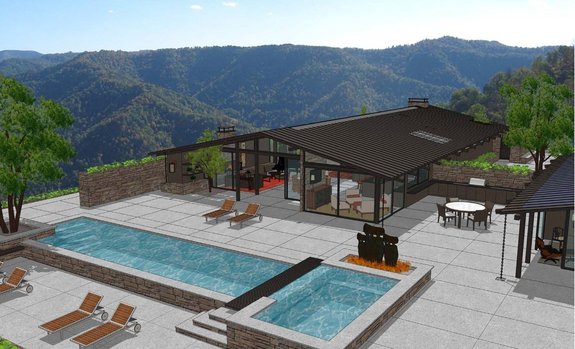 Plan 544-2 is inspired by the classic designs of Frank Lloyd Wright, Cliff May and Quincy Jones.

This house plan was modeled after the work of Cliff May and A. Quincy Jones. Unlike May’s houses, mostly built with a wood frame, stucco siding, single-pane windows, and a tile or shake roof, this design is done with a steel frame, post-and-beam construction, dual-pane insulated glass, and a standing seam metal roof (pictured above).

Employing a steel frame isn’t cheap, but it means that the walls don’t have to be load-bearing. That allows for the use of more glass, even in the ceiling. The home features a large skylight at the roof ridge, something you often see in mid century modern house plans.

This home design, unlike its mid century modern precedents, has a compact, rectangular footprint. It could be built on mainstream lots within established neighborhoods or master plan developments. Integrated gardens are designed into the plan – the most prominent shows up in an alcove between the great room and master bedroom – to create prized connections between home and nature. Powered by photo-voltaic panels, with radiant heating in the floor and a tank-less hot-water heater, the home meets the highest environmental standards.

One strike against this style of home is an unfriendly street pose created by a lack of fenestration on the front. Mid century modern design emphasized privacy to the street, saving views for the wide-open rear of the house. The floor plan followed suit. The typical approach was to put private or utility spaces toward the front of the home and reserve public rooms for the windows back.

In this plan, true to form, clerestory windows and skylights light a private studio near the entry; a bath and closet make it an ideal guest suite. Multiple covered porches and patios in the back enable tantalizing outdoor living options. See the floor plan below. 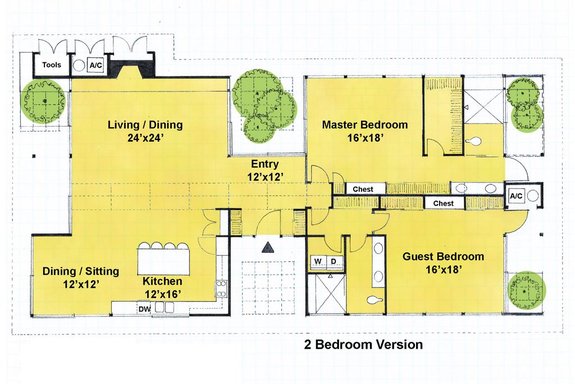 Modern House Plan with a Courtyard 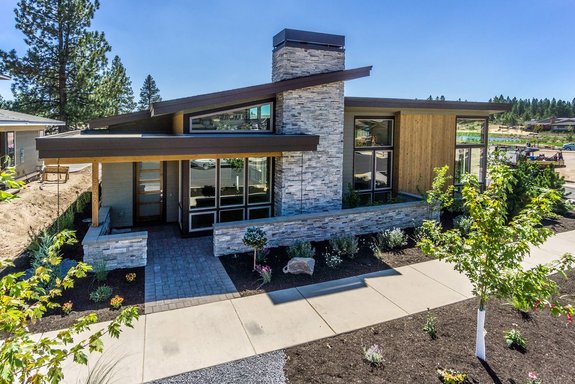 The angular roof line in this modern house plan (above) directly references mid century modern home plans. So does the home’s footprint, which wraps around a courtyard/patio that can be reached through both the dining area and master bedroom.

Clerestory windows light a vaulted, wide-open living space with zones for eating, cooking, and socializing. Even the materials – stone and glass with wood accents – were drawn from the mid century palette. Otherwise, the plan is up to date with contemporary accouterments – large windows facing the street, a kitchen island, and a large laundry room. See the floor plan below. 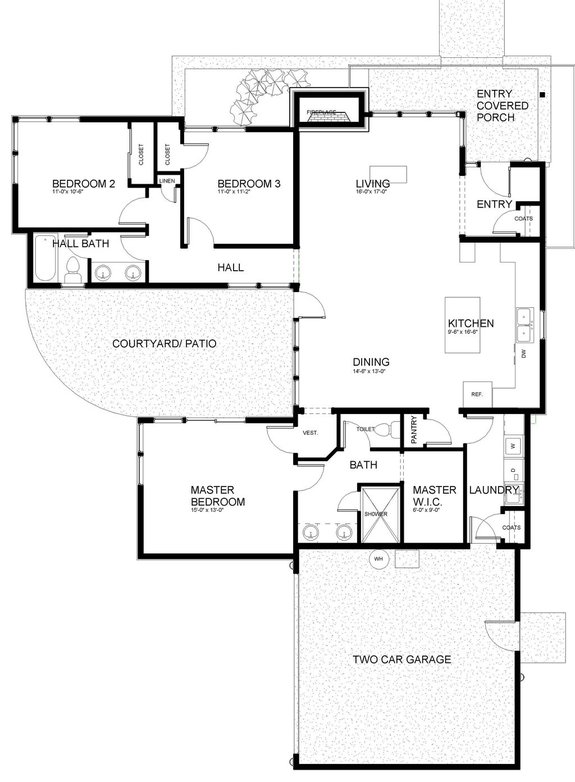 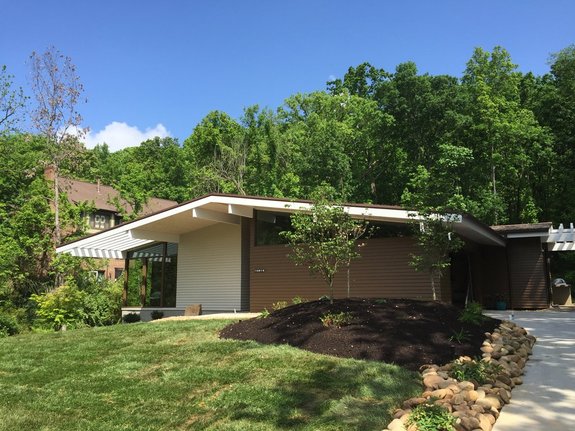 By contrast, this plan (pictured above) mimics the California production homes developed by Eichler, picking up on their shallow roof pitch, overhangs, and narrow rafters. The firm even specified grooved exterior panel siding to match the pattern on mid century modern house plans. The only windows facing the street are high clerestories. All the major rooms of the house have vaulted ceilings, paneled to give them texture, with exposed rafter beams. The ceilings follow the roof line, creating spatial excitement inside the house, and extend over the patio in back.

A grand hallway that bisects the house offers views to the backyard. The absence of a formal dining room leaves space for two big family rooms, one anchored by an open kitchen with a large fireplace, the other open to a trellised back porch.

Window panels rise to the ceiling in the major rooms. Nods to contemporary living standards include dual master bedroom closets, a large laundry/utility room, and a walk-in pantry. The house is designed to be built with structural insulated panels (SIPs) that assemble quickly to form the shell. See the floor plan below. 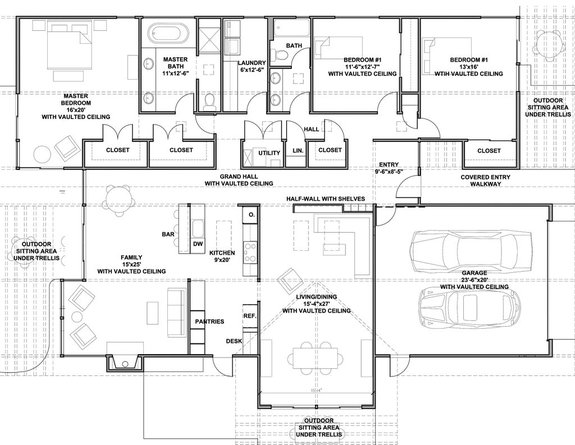 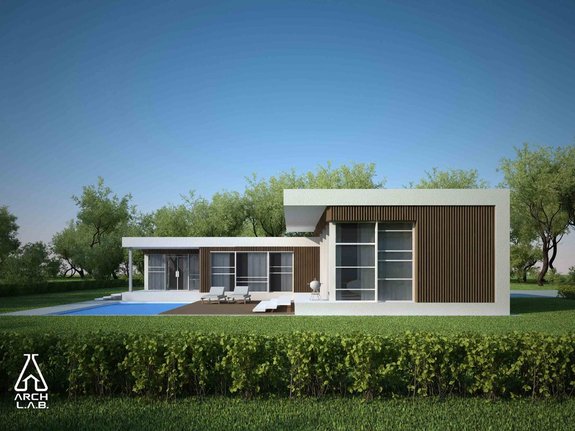 Feel like you may have seen this home before? This plan (above) includes unmistakable Richard Neutra references – a cantilevered C-shaped roof, vertical slat wood siding, and stark massing. The inaccessible front elevation belies the openness of the interior. Glass windows in sunken frames connect the great room to a patio, deck, and pool.

The home’s three bedrooms open to the outdoor space as well. The master suite features a private covered patio in addition to a walk-in dressing room. See the floor plan below. 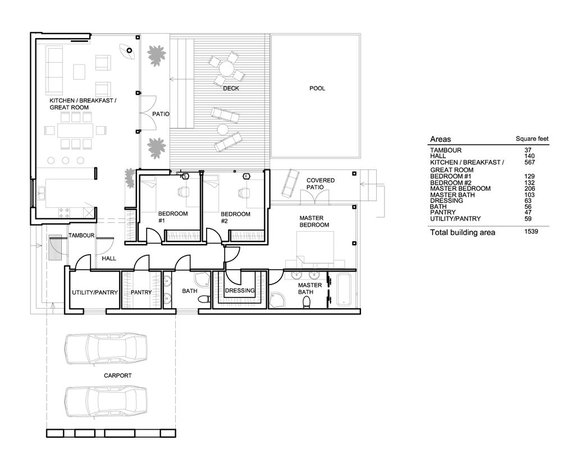 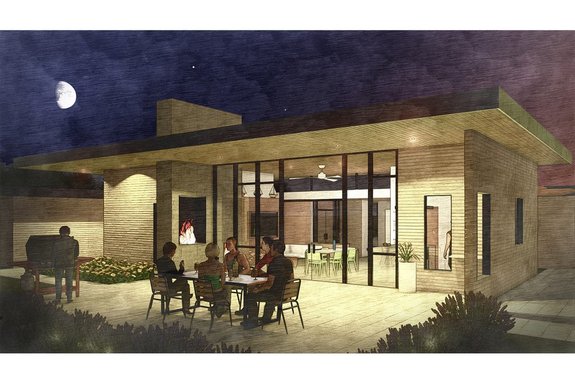 Plan 498-4 is functional, livable, and stylish.

This house design (above) provides an even more updated look at mid century modern design. A flat roof and clerestory windows clearly references the style. So do horizontal stonework, rafters that extend from outside to inside, and unbroken window expanses. The plan also sensibly divides public and private interior spaces. The entry is actually indoor/outdoor corridor that cuts the plan in half – separating a bedroom wing from the public realm – even as it provides a view through the house to backyard. A secluded master guest suite takes its place just beyond the entry. The room could also be used as an office or library.

The plan is long on distinctive interior architecture. The great room centers on a stone fireplace wall that extends from inside to outside, with pits on either side of the wall. The wood ceiling in the living room carries past a window wall to form the porch ceiling. A separate home entertainment wall puts the TV at eye level and away from the glare of the window. The big window wall brings a sense of airiness to the public realm of the home. See the floor plan below. 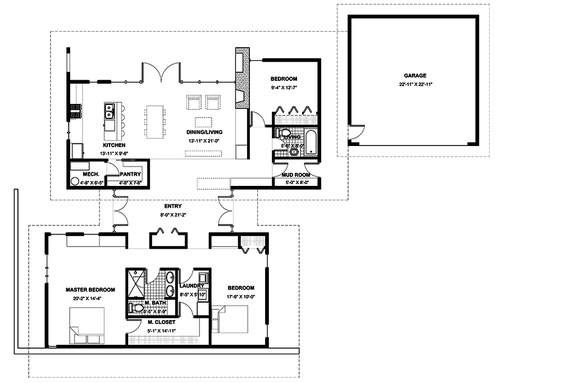 One reason why mid century modern home plans are enjoying a renaissance is because they are mostly ranch house plans. One-story living appeals to aging baby boomers who have decided they’d prefer not to climb the stairs. It’s sometimes difficult to make a ranch plan pencil out in urban markets with land selling for such a premium. But the trade off, a smaller house, may be well worth the sacrifice given the great interior details, outdoor connections, and aesthetic joy this type of plan provides. 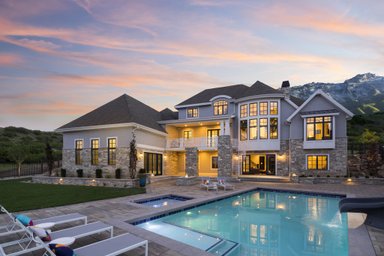 15 Luxury House Plans that Wow
These plans include luxury features, smart details, and amenities that you're sure to love! 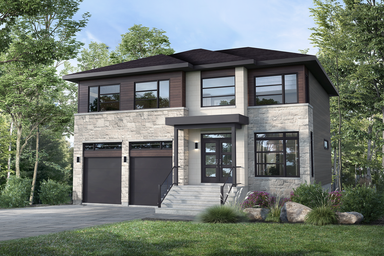 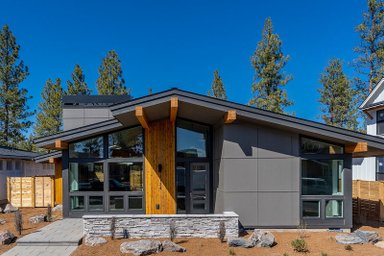 Small 3 Bedroom House Plans with Photos
This collection features small, 3 bedroom plans with photos to help you envision the home of your dreams. 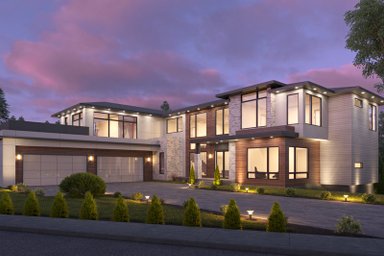 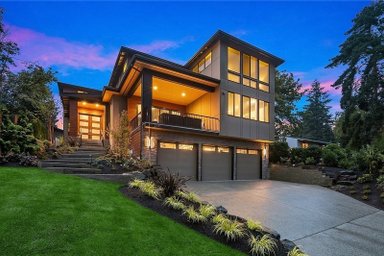 Hillside House Plans with Garages Underneath
These plans save lots of space and are perfect for building on sloped land. 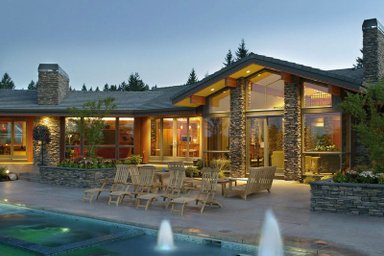