I just watched 10 Homes That Changed America, an excellent new PBS television series ably hosted by TV producer Geoffrey Baer (and produced by WTTV Chicago). It shows how these particular homes (some are apartments) affected, or signified changes in, American life and culture. Architecture critics Paul Goldberger and Reed Kroloff and several other experts weigh in to provide context and explain key elements. The ten homes are discussed chronologically beginning with the Taos Pueblo in New Mexico, built between 1000 and 1450 and designed for defense, and Thomas Jefferson's Monticello, of the late 18th and early 19th centuries, which brought classical Rome to the US by way of Palladio.

Click here to explore our collection of ranch house plans.

The Gamble House in Pasadena by Greene and Greene, of 1908 took the bungalow idea, which was already shaping suburban development across the country by then, and transformed it into high art. Typical bungalow features like porches, exposed timbers, and sheltering eaves are here crafted in such a way as to make the entire structure a gigantic piece of furniture. I think you could say that this house is not only the ultimate bungalow but also the apotheosis of the built-in: from the extraordinary front stair where every piece of wood is lovingly expressed to the built-in cabinets and credenza. As Gamble House director Ted Bosley explains, here you see how nature in all its diversity -- wood, clay (ceramic tile) stained glass -- gets nurtured and indoor-outdoor living becomes celebrated.

Fallingwater, at Bear Run, Pennsylvania, from 1938, was, as the series points out, Frank Lloyd Wright's response to European modernism. In other words, to folks like Le Corbusier and his all-white Villa Savoye near Paris of 1929, which is a pavilion on pilotis (simple round metal columns). To my eye, Wright's very International Style-looking horizontal planes (those creamy cantilevered balconies) rooted in the bedrock of the waterfall, are like an architectural version of “Take that, you greenhorns! I can be Machine Age-International and organic at the same time!” His client, Pittsburgh department store magnate Edgar Kaufmann wanted something special and he got it.  I think the house is the ultimate essay in contradiction.

Unlike the Villa Savoye, it doesn’t stand apart from its setting, but literally splashes in it. It is cerebral in its use of the cantilever and at the same time robustly rustic and visceral in the way it becomes its own sort of ledge-leaping waterfall right beside the real thing and even incorporates stones from the site into its design, as Falingwater's director points out in the film. The house got a bit damp at times, but that didn’t seem to matter very much, since it was a vacation retreat. It may well be Wright’s most extreme house and makes the visitor marvel at the nature of architecture and the architecture of nature. When I visited I felt I was on an architectural ride.

The Charles and Ray Eames House

The Charles and Ray Eames house in Santa Monica (of 1949) was built by the famous husband-wife team of industrial designers whose furniture and exhibitions epitomized the notion that design should be about "making the best for the most for the least." The house was influential in the way it showed how to use standardized parts to express a machine esthetic that was not cold, austere, and uniform but warm, humane, and individualistic. In the film, grandson Eames Demetrios shows how the house acted as a kind of collecting box for Charles and Ray's huge array of objects, both precious and ordinary, how it became a wonderfully flexible frame for living.  I think the PBS show could have made an interesting comparison here between the Eames interest in concentrating on the frame, and the approach of the Greenes and Wright, which was to design the frame and everything within it. The latter approach doesn't leave any room for a client's changing sensibilities; an interior cannot evolve. The series points out that Monticello was treated by Jefferson as a "cabinet of curiosities," but I would also point out that this is not so different from the way Charles and Ray treated their design. Both houses were built as ongoing experiments and evolving exhibitions!

Michele Kaufmann's prefabricated Glidehouse, developed in the early 2000s, shown to the public for the first time by Sunset magazine and then built all over the country, is the last house in the series, an eco-savvy exemplar of prefabrication. I would add that it also shares DNA with the Eames house in its manipulation of standardized forms and processes. The Glidehouse is part of a long line of prefab housing experiments going back to the California Gold Rush, Sears houses, Levittown, and Eichler tract houses. When the house debuted at Sunset in Menlo Park, California, there were huge lines around the block waiting to step inside. It met a pent-up demand for a lower-cost, high-quality, sustainable, indoor-outdoor living environment -- which has in turn led to the Small House/Tiny House movement. 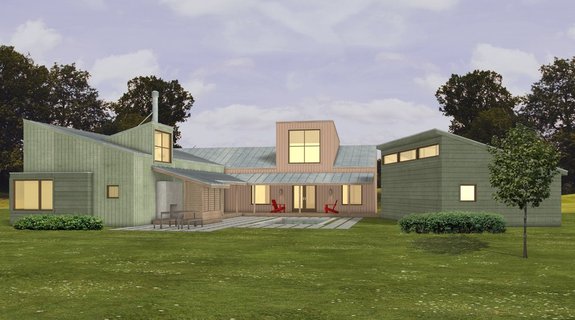 To my mind, there was one significant omission in the PBS series: the suburban ranch house. This long low one-story house type popularized by Cliff May was the modern successor to the California bungalow and took the country by storm after World War II, especially in the 1950s and 1960s. Roughly 18,000 houses were built to May's designs, from California to Connecticut and abroad, and it inspired many others. The ranch house remains appealing today, say in plan 433-2 (pictured above) or in plan 888-17 (pictured below), which strongly echoes the Cliff May design. 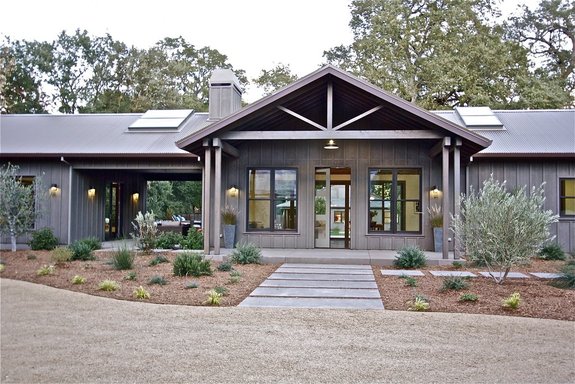 I highly recommend viewing the PBS series as a way to start thinking about the building of your new house. Of course your design doesn't need to change America (better if it doesn't do that, actually!) but inevitably, building your house will change the way you look at space, light, fixtures, furnishings, even nature, since suddenly you will need to decide what you need, like, and can afford. Or, put another way, with one question per example...From Greene & Greene, how many built-ins? From Wright, what's the connection to nature and the site? From Eames, will the design be able to evolve over time? From May, how accessible is it? From Kaufmann, is it sustainable? You will think of others!

11 Homes that Changed America: 10 in the New PBS Series...Plus 1! Inspiration

Save this code!
Enter this code at checkout for instant savings on your house plan order.*
Need build costs? Use code CTB2022 to save $10.00 on your Cost to Build report!
*
Valid on participating plans. Some exclusions apply. Please call us with questions.