Cost To Build A House And Building Basics |
Floor Plans |
House Styles
Learn how to read a floor plan.

At first glance the symbols on a floor plan may look like an unintelligible collection of random lines and strange markings. On closer inspection you can probably figure out that the rectangle in the laundry with a “W” in the middle is probably a washer. But other markings, like the location of upper cabinets, may remain a mystery without a good road map. And there’s a big payoff in having this information – you could save you thousands of dollars in design or construction changes down the road by knowing exactly what’s in a plan before you buy it.

The natural starting point on this quest is identifying walls, windows, and doors; they join to form the building envelope. This will give you a better sense of the home’s conditioned square footage, a number you may need to bid out construction. The first, and maybe easiest, thing to identify is a wall. A long dark rectangle indicates an exterior wall; it may be detailed with white space in the middle to highlight the location of studs and drywall.

Blank space between exterior wall sections indicates the location of a door; it may be shown on the plan as an arc to indicate its swing direction. That’s good information to have because affects how you can furnish a room. Pocket doors are often shown as even thinner rectangles that disappear into a wall, and barn doors are typically drawn alongside a wall. Again, it’s nice to know how much wall area doors cover when open; that will affect how you can decorate the wall. Symbols for bi-fold and double-hinged doors are pretty self-explanatory.

Thin lines between wall segments typically signify windows. There are different symbols for different types of windows. A casement window, to differentiate it from a standard double-hung, may have a line or arc to indicate the direction in which it opens. A picture window may be drawn without a line in the middle. Bow and bay windows are often depicted as bump-outs with the same lines you see used for windows. If you aren’t sure what type of window you are looking at, you could check the exterior picture or drawing of the plan. Also, window styles are something that can be changed relatively easily down the road.

Interior walls are often marked by thinner dark rectangles, though many plans, like the one below, use the same shape for interior and exterior walls. A dotted line indicates architectural details within interior space, such as a tray or coffered ceiling; they may be called out in writing on the plan, too. A narrow rectangle composed with dotted lines typically indicates a beam in the ceiling. Black circles or squares stand for columns. 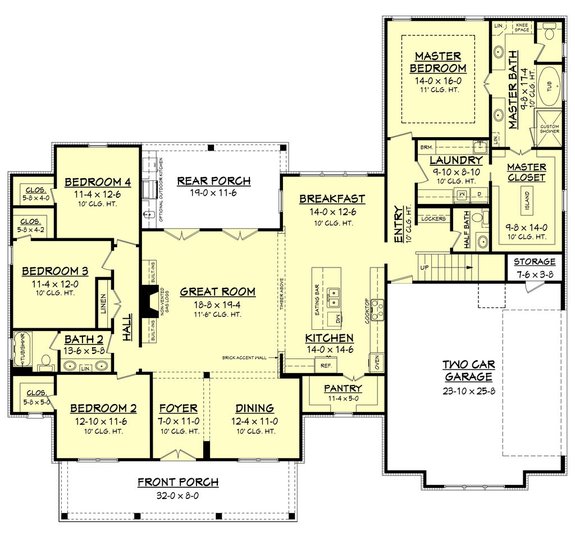 Here’s a wide-open floor plan with ceiling details marked to define rooms. Beams drop from the ceiling to demarcate the dining room and kitchen spaces. The black square in the northwest corner of the dining room is a column. The squares reappear on the covered back porch, where beams suspend the ceiling. The dotted lines that wrap the porch exterior indicate beams or molding.

The “wet rooms” of the house have their own secret language. If countertops have a dotted line across them – like the ones in the floor plan above -- that means there are cabinets above. Islands may also be bisected by a dotted line to demark a sitting area with open space below. Check to see whether a single or double sink is called out. The range/oven will be a square with circles (burners) on top. Refrigerators are often shown as boxes with “ref.” written on them; sometimes their doors are shown. The space for a dishwasher is often marked with a DW. Make sure it’s near the sink. 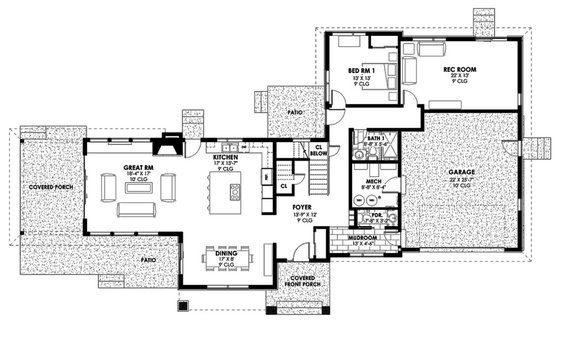 Some plans denote preferred flooring options. Tile, often found in the bathroom, is often signified by crisscrossed lines or square tiles. Wood flooring and carpeting is rarely called out on plans, since it’s a matter of preference. Here’s a plan (design 1042-19 above) that shows concrete floors in the garage, patio, and porch, and tile floors in the bathroom. 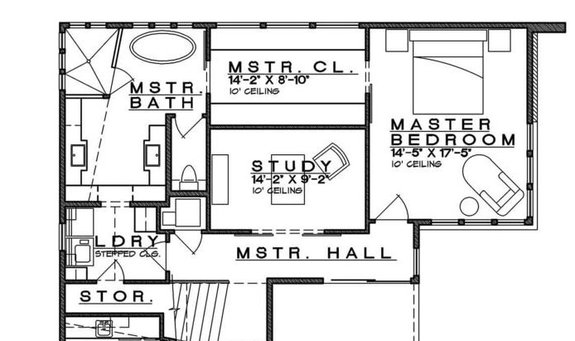 The symbol for a bathtub is pretty self-explanatory. But some plans will detail a corner bath -- an oval within a triangle. The latest plans (like plan 935-14 above) may show a freestanding tub in the middle or off to the side of a bathroom, a hot trend in new home design. Showers are typically marked with X’s through them. In bigger homes with luxurious master baths, they can get pretty large; don’t be fooled. The symbol for a sink is easy to spot. You want to check whether the bathroom has one or two lavs and whether there’s space for a medicine cabinet, if that’s important. It’s easy to spot a toilet. 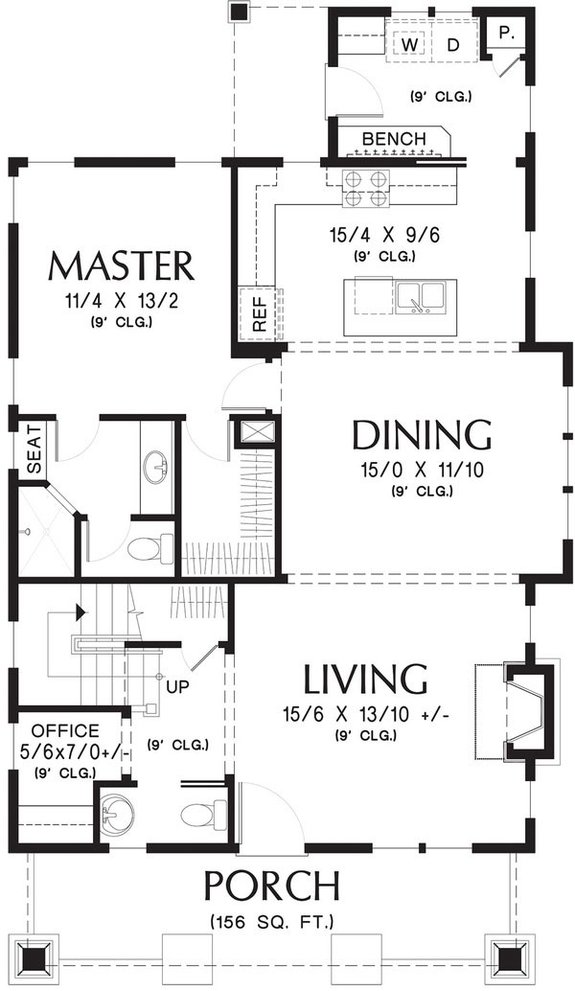 There are three basic stairs configurations with fairly self-explanatory symbols: straight up, sweeping, and turned with a landing. Here’s a plan (design 48-646 above) that calls out a turned stair with a half-landing and storage underneath.

Laundry rooms, which may be marked as utility rooms on some plans, have their own iconography. Washers (W) and Dryers (D) are often shown as rectangles with corresponding letters. You’ll need counters to fold laundry; a dotted line through them once again indicates that there’s counter space above. Some laundries may even have small bill-paying offices and storage for season items. Check the plan closely to see if cabinets or counters could serve these purposes. 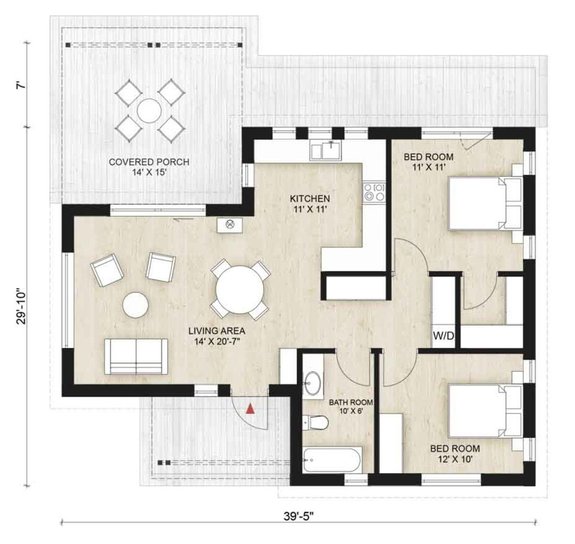 Some plans may even present an idea of how to furnish a room. They may show you how many chairs fit around a table fits in a dining space. They may put a sofa in the optimal spot to watch television and gaze outside. Beds often mark the best location for privacy and enjoying morning views. Here’s a fully featured floor plan (design924-9 above) that presents a clear vision of how to furnish an open plan that might otherwise be difficult to imagine.

See more tips on how to read a floor plan

Learn how to mentally walk through a floor plan