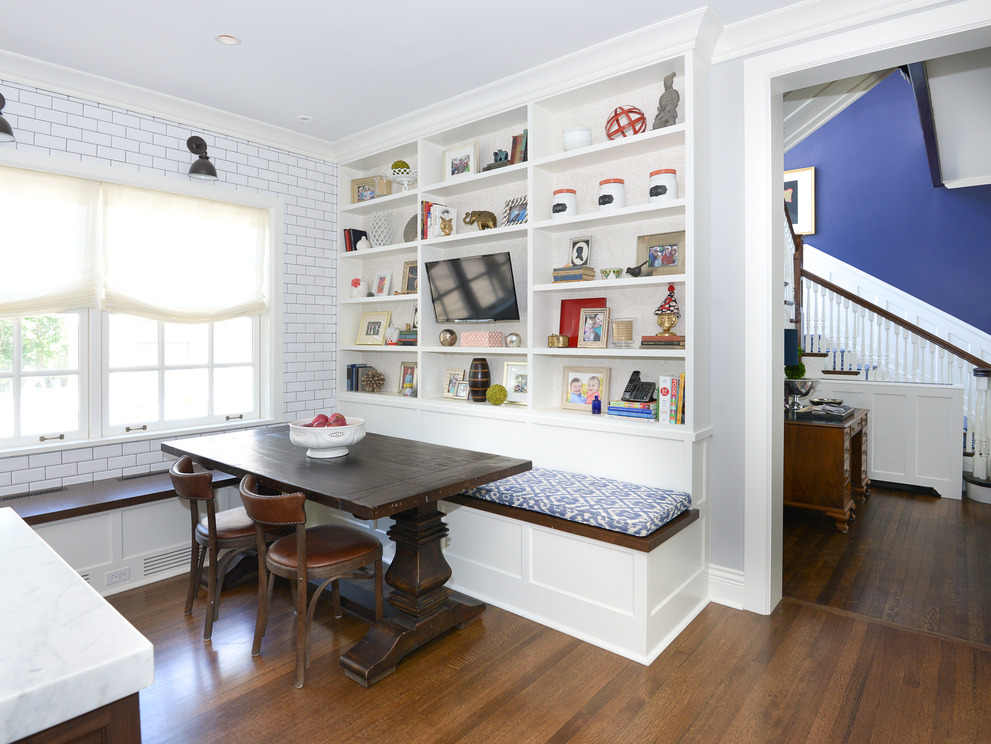 Banquettes are back! In this kitchen corner the sleek white back
With more than 500 remodeling entries from across the country (and nearly every state), the annual Chrysalis Award Program provides a window into what homeowners are doing to their homes right now. It's a great place to look for remodel trends, as well as ideas to adapt for your own home. Categories include: Kitchens Under and Over $75,000; Bath Remodels Under and Over $50,000; Additions Under and Over 250,000; Residential Interior Under and Over $100,000; Outdoor Living; and Universal Design. I served on the jury for 2017 and here are some of the ideas that stood out.

The Kitchen As Event Space
It's clear that when people start thinking about the kitchen of their dreams, they mostly want a space that

feels open and that can multitask without people getting in each other's way. In this example by LS3P of Greenville, SC,

the kitchen-dining space is a few steps up from the living room and set off like a stage. The close-up view shows how the island seating, side columns, and down lights accentuate the bistro kitchen idea: you sit at the bar -- or father away in the living room -- and watch the chefs at work the way you would in a chic restaurant.

The makeover by Splash Kitchens & Baths of La Grange, GA capitalized on an industrial loft-like setting by

keeping it as open and light as possible while adding built-in banquette seating beside the peninsula. The balcony leading to the

bedrooms, the tall windows, and the open, angled ceiling add to the sense of verticality and spaciousness. In other words, the designers made the most of existing features. The banquette idea is not new but has become more popular as a way to define an informal lounging and eating area within a larger space. The design at the top of this post, by New Concept 180 of Northbrook, IL, uses a built-in banquette to create a sitting and entertainment area at one end of the kitchen, below a flat screen TV.

As part of the more open kitchen, islands are assuming new shapes and adding flexibility, as shown in this

kitchen by Neil Kelly Design/Build of Portland, OR, where part of the island becomes a cantilevered triangular
counter so that two people can face each other while dining within what is essentially a compact space where a more typical rectangular counter would not have fit. The rest of the island is a marble-topped work surface and includes the sink.

Where there is enough room, two islands might be a possibility, as demonstrated in this design by Rhode Island Kitchen & Bath in Warwick, RI,

where the island at the center is for food prep and the two-tiered one at the side is for a combination drinks station and casual eating bar.

In a very small, even tiny house, say, the kitchen is the living room so every inch counts, as is deftly illustrated

in this design by Lark Architecture of Chicago, IL. There is no room for an island so counters and wall niches, ledges, and

a low built-in unit storage unit along one wall are essential.

The Bath as Decompression Zone
Bathrooms are always the next most remodeled rooms in the house after kitchens -- homeowners understandably want bathrooms that give you a visual lift as well as get you clean. "Ceremonial" soaking tubs

are still much in evidence despite rumors of their impending demise, as you can see in this elegant design by S & W Kitchens of Longwood, FL. The bright blue wall vividly sets off the tub, reinforcing its position at the center of the room, and the symmetrical arrangement of the surrounding fixtures adds to the sense that you are entering a contemporary bathing temple.

Doorless showers and trough drains are more and more apparent. This example by Sun Design Remodeling

of Burke, VA is especially appealing for its simplicity. The glass wall of the shower accentuates the openness; the raised lintel keeps the water in check. Blue tile in a subway pattern on the rear wall provides the one dramatic feature, making the small space memorable.

Other Trends
Barn doors continue to gain in popularity and it's no wonder: they take up less space than conventional swinging doors, and they

can become appealing ornamental features in their own right, as the two examples in a new guest house by Baxter Construction, of Hopewell, NJ make clear.

The hearth is morphing, thanks to expanding rules against burning wood, the rise of bio-fuel, and sleek flush-

mounted inserts. The glamorous all-white example by Rusk Renovations of New York, is a case in point. The minimalist modern fireplace echoes the sleek cantilevered hearth. In another example, for a basement

remodel by Revolution Design and Build of Wayzata, MN, the fireplace wall is also contemporary but surfaced in stone veneer for a more rustic Mid-Century Modern look, with fireplace opening and flat screen TV treated as twin side-by-side focal points (instead of the more conventional placement of TV over fireplace). And the hearth itself extends almost the length of the room for extra seating and display space. A two story living

room in a remodel by Zack de Vito Architects of San Francisco, CA uses three elements to shape the space with simplicity and sizzle: sliding window wall, double height book shelves, and the long low cantilevered hearth -- again with twinned TV and fireplace opening. The clarity of the design -- with its seamless indoor-outdoor unity -- is very appealing.

Wild Card
A good awards program always has one or two extreme ideas that show a lively imagination at work. In the Chrysalis Awards, for me at least, it was this wonderful Tudor inspired bedroom by Rhino Builders of Kansas

City, MO -- as if Henry the Eighth had decided to downsize. The owners wanted something English -- right out of Masterpiece Theater -- and they got it, down to the rich paneling, diamond-patterned window, luxurious fabric, and carved four poster bed. Talk about a dream commission!