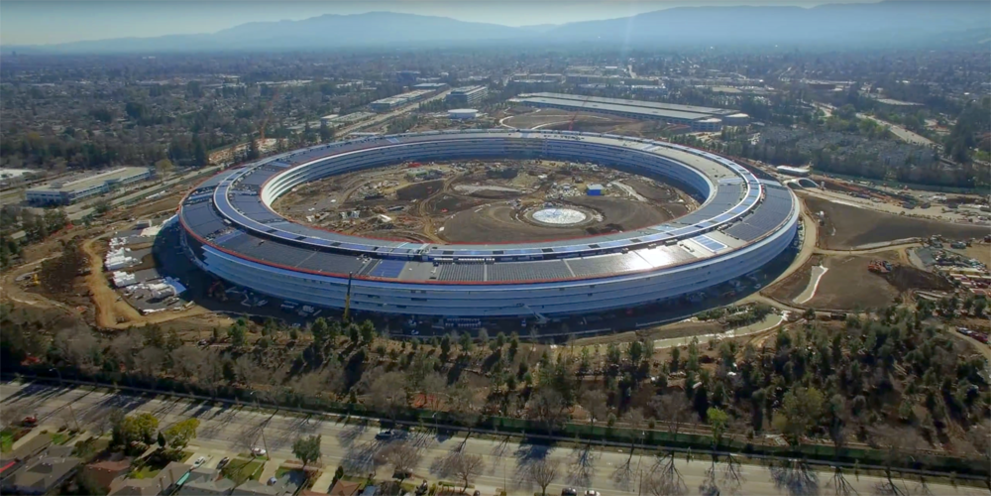 The future has landed in Cupertino, California. Photo courtesy 9
[NOTE: Because I live and work within the high tech culture of the Bay Area, I cannot resist remarking on the vast new Apple headquarters nearing completion in Silicon Valley. So think of this post, which is an update of one for an earlier blog, as just for fun, or to give yourself a break from browsing floor plans. Though of course I have added two somewhat related house plans at the bottom! Ed.]

Is it the new iPentagon, or a late Renaissance fortress, or another Swiss Collider? Circular "Campus 2" in Cupertino, CA, no doubt an architectural riff on their original 1 Infinite Loop address (according to my colleague Jin Woo Shin), is generating online excitement as mesmerizing drone’s eye views (from the addictive 9to6mac.com) chronicle its construction. The complex, due to open later this year, is the latest, largest, and most lapidary Apple product yet: 2.8 million sq. ft. for 13,000 employees. Also perhaps the most expensive, with a cost that has reputedly risen to roughly $5 billion. It's the work of eminent British modernist Sir Norman Foster (of Foster + Partners) who designed the “Gherkin” highrise in London and the Hearst Tower in New York. I originally thought this project was a missed opportunity in that a new Apple campus could have revitalized a whole neighborhood of downtown San Jose, for example. But now, understanding a little more about the nature of the Apple culture of control after reading the Isaacson biography of Steve Jobs, I can see that such an approach would never have been possible. This new building seems a perfect expression of Apple’s design ethos: a brave new world of possibility hermetically sealed within an elegant container — call it the iHQ.

The design makes the historian in me look for precedents and it turns out there are many. Sir Norman explained the genesis of the design himself in an interview with Architectural Record: “First of all, there was a smaller site. Then, as the project developed, and the Hewlett-Packard site became available, the scale of the project changed. Meanwhile, the reference point for Steve [Jobs] was always the large space on the Stanford campus—the Main Quad—which Steve knew intimately. Also, he would reminisce about the time when he was young, and California was still the fruit bowl of the United States. It was still orchards. We did a continuous series of base planning studies. One idea which came out of it is that you can get high density by building around the perimeter of a site, as in the squares of London. And in the case of a London square, you create a mini-park in the center.”

With those helpful hints, I started looking around. As it happens, the Stanford Quad, built

between 1887 and 1906 and designed by Shepley Rutan & Coolidge, the Boston firm founded by H. H. Richardson, surrounds a plaza with eight circular plant islands running down the middle: circles in the square! (photo courtesy Wikipedia) And here’s one of the most famous

examples of London squares: the plan of Regent’s Park by architect John Nash, from around 1833 (image courtesy Wikipedia). And wouldn’t you know — there is a circle in the center (identified as “Jenkins Nursery”), just waiting to steal the show! So, if we want to analyze the DNA of the Apple design it’s part Stanford Quad, part London square, part Apple i-pod, er pad. But there are other possible antecedents. The most obvious comparable geometric self-enclosed

environment is The Pentagon in Arlington, Virginia, designed by Bergstrom and Witmer and completed in 1943 (photo courtesy Wikipedia). Planned as an irregular pentagon following the shape of its original site, it was regularized when the project moved to the final more open plot of land. According to Wikipedia: “The building retained its pentagonal layout because a major redesign at that stage would have been costly, and Roosevelt liked the design. Freed of the constraints of the asymmetric Arlington Farms site, it was modified into a regular pentagon which resembled the star forts of the gunpowder age.”

What better metaphor for the Defense Department than a fortress. It turns out that the great French modern architect le Corbusier was a huge fan of The Pentagon after touring it in 1946, as Mardges Bacon explains in the March 2015 issue of the Journal of the Society of Architectural Historians. Bacon quotes Corbu saying it embodied “all that I could design in my projects so implacably rejected until now: silence, efficiency, brilliantly lit interior streets, enlivened with shops expanding into restaurants, cafes; sparkling clean; ramps, hallways, etc.” Wow. That also captures the spirit of the Apple building! [I love Corbu’s use of “implacably rejected.” You can tell he was irritated and yearning to build big. He was soon to design his famous Unite d’Habitation apartment block in Marseilles and was evidently influenced by the Pentagon and various TVA dam projects he saw on his American tour.]

But I digress. The point is two wealthy entities working on complex and often secret development programs were drawn to a simple, almost scaleless abstract shape. So-called star forts have a long

history not only as fortifications, but also as towns, like this Italian Renaissance plan for Palmanova, an idealized city that was actually built by the Venetians around 1593 (both images

courtesy Wikipedia). The Apple design is simply a little more abstract and minimalist, and will almost function as a kind of town since workers will be eating most of their meals there, presumably. The company intends to plant a lot of apricot trees to echo the region’s earlier history as a major

fruit-growing region, as Sir Norman mentioned. Perhaps a more telling prototype for the Apple Spaceship is the Large Hadron Collider near Geneva, Switzerland, the world’s largest and most powerful particle accelerator (photo courtesy CERN). Built by the European Organization for Nuclear Research and completed in 2008, it’s a circular underground tunnel with a circumference of 27 kilometers. Lead ions known as hadrons are accelerated so physicists can study the origin of mass and why some particles are very heavy while others have no mass at all. That sounds increasingly like the once and future Apple product. The new Apple campus is a remarkable and lavish use of land (albeit park-like) and material — there will be roughly six kilometers of ultra clear glass alone — so I guess you could call the it the world’s largest product accelerator: a futuristic place to invent the future.

For the latest drone video showing the campus as it appears now, click here.

On a somewhat smaller scale (!!), we have a few geometric home designs in our inventory, such as

Plan 64-165, which heightens the meaning of circulation -- it's circular! Or rectangular Plan 520-4, where two

of the four walls are all of glass and the roof is an outdoor living room. For the right clients and site, a geometric design might be just the ticket -- and it won't cost 5 billion dollars!