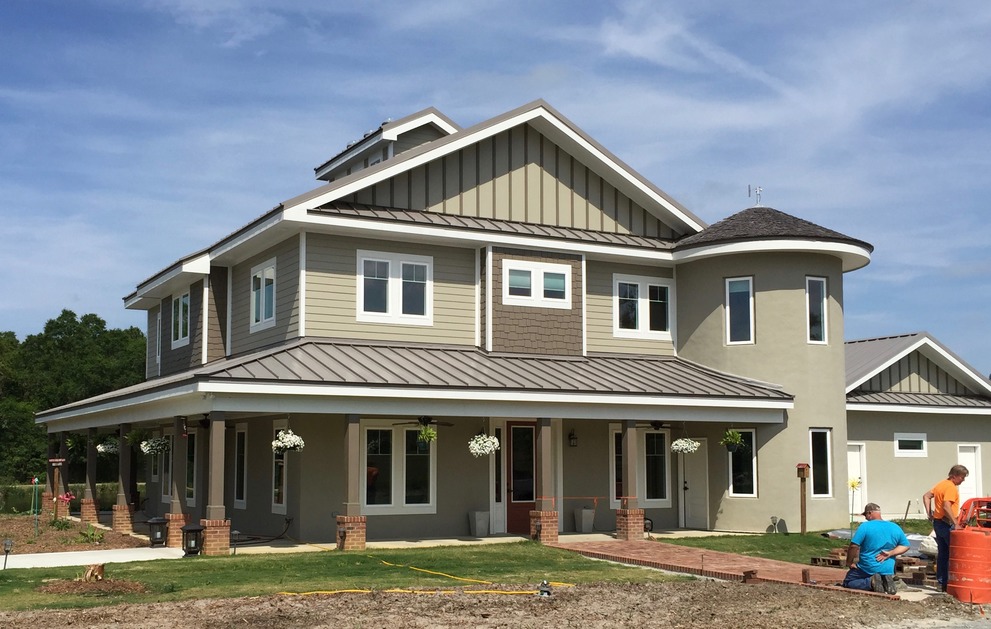 The Future Farmstead project in Tifton, Georgia is designed to b
Before Agriculture Professor Craig Kvien and his research team designed The Future Farmstead project, a 3,400 experimental home in Tifton, Ga., they did what many market researchers do – brought in a group of farmers, ranchers, and builders to provide guidance. Permanence topped the list of requests, though the participants didn’t exactly put it that way. “They said they wanted to be born and die in the house,” says Kvien, who teaches at the University of Georgia in Tifton. “They wanted materials that would last a long time, and systems that wouldn’t cost a ton to operate. They were also interested in accessibility – making sure that they could always live in the house.”

The team’s first response was to design a home that would look at home in the rural landscape -- now and in the future. Wide porches, generous overhangs, a turret reminiscent of a grain silo, and a metal roof capped with a cupola combine to create a timeless farmhouse look. Argon-filled casement windows open either way to capture prized breezes.

After the team decided they wanted students to live in the house and monitor its systems, the University required that it be built to ADA (Americans with Disabilities Act) guidelines. Aside from a kitchen sink and an

with pull-out shelf). Doorways and hallways appear pleasingly wide, electrical outlets conveniently higher, and lights switches within easy reach. Providing handicap access to the second story proved more difficult. They installed a lift rather than a more expensive elevator, and had the perfect place to put it – in the turret. The money spent on the lift pales in comparison to the annual cost of a nursing home, Kvien says. “I’ve had builders tell me that it would be easy for them to add a turret to their plans for a similar purpose.”

The focus group participants challenged the team to make the home as inexpensive to operate as possible. They responded with a home that generates its own electricity, and hot water, and is very water efficient. Solar film applied between the standing seems of the metal roof provides most of the electricity needed to

operate the house. A solar thermal system under the roof provides hot water (shown above). The  ground source heat pump – has loops in the pond and under the waterway in the back yard (for comparison) – heats and cools the home. The students monitoring the systems have already determined that – in this case -pipes buried in the ground are more efficient, probably because the temperature under ground is more consistent.

The team really sweated the construction details to prevent energy loss.  They used tilt-up concrete walls for the first floor and stick-framed the second floor. The home was first insulated with closed-cell foam then the

walls and ceiling were packed with recycled blue jean insulation (shown above). A reflective radiant barrier under the solar thermal system helps to cool the home, which achieved R-30 in the walls and R-40 against the roof deck. Sensors stationed throughout the house track electrical use by circuit. The sensors feed back into an energy monitoring and control system that shows how much electricity the home produces, how much it uses, and the size of monthly electric bills. “Looks like our electric bill will be $23 this month,” says Kvien, who would rather it be zero. He plans to install additional photovoltaic film on stanchions in the yard.

The Future Farmstead was conceived to provide freedom from the grocery store as well as the utility grid. Instead of decorating the yard with boxwoods, the students have planted blueberry bushes, frost-tolerant,  seedless lemon and tangerine trees, and disease-resistant plants and vegetables, interspersed by a series of

raised flowerbeds. The gardens should generate enough food to feed a small family, and the pond  is a source of fish and water birds.

Water from sinks and showers inside flows through a grey water system that feeds the surrounding edible landscape. Plants are fed with a drip irrigation system to minimize water use. Kvien investigated the practicality of doing net-zero water but found the requirements for seed wastewater reuse to be too demanding. As a result, water from the low-flush toilets (1.2 gallons) goes into the city sewage system.

High on the wish list for the focus group participants was the ability to better manage the farming operations from home. Initially Kvien and crew wanted to design a farm management dashboard to monitor and control some farming operations, but their plan was overtaken by events – the introduction of inexpensive cell phone apps that provide similar functionality.

Now, from his smart phone, Kvien can view feeds of cameras around the farm to monitor the progress of work. The applications rely on a wireless cloud over the campus and at cooperating farm sites. Radio feeds have been installed at variety of sites including the home, dairy, cotton gin, cropland, pasture, and forested areas.

Through GPS chips, they can track the whereabouts of trucks making deliveries. An app on the phone can open and close shop doors. Other sensors and apps can help farmers  tell whether cows are suffering from heat stress and monitor critical soil moisture in the fields. “Farmers are struggling with how to do more with less – technology can really help.”

Here are some other cool features of the house:

--An induction cooktop in the kitchen heats food fast and more efficiently by heating the pan rather than the cooktop.
--The kitchen oven opens sideways, making it wheelchair accessible.
--Four induction-charging spots provide wireless recharging.

“When we have meetings here the students fight over who gets to recharge their phone,” says Kvien.
--A single-unit washer and dryer cleans a load of clothes in two hours. The 110-volt appliance doesn’t require a dryer vent.
--Body-heat sensors turn lights on and off when students enter and leave their bedrooms.
--Bathrooms include hands-free faucets, zero-threshold shower floors,

Boyce Thompson is writer, speaker, consultant and author of The New New Home.

For more information about the Future Farmstead project click here.
For a collection of Farmhouse style plans click here.