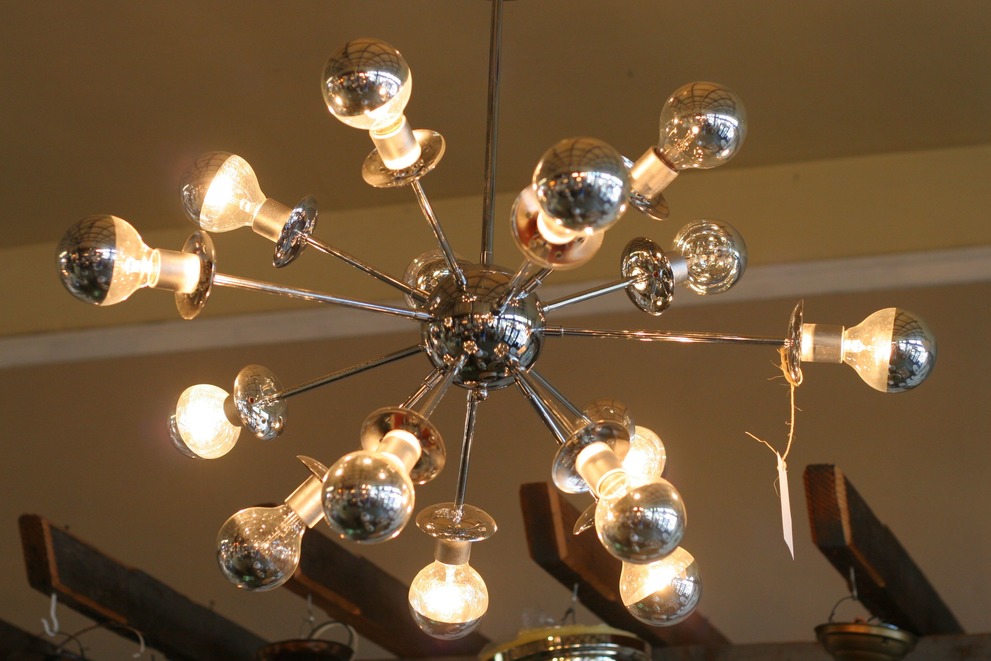 Salvage and vintage stores provide a rich source for fixtures if
Looking for the perfect Victorian tiles for your bathroom? How about an original Arts and Crafts light fixture for your front porch or a Mid-Century modern light fixture for your dining room? We decided to visit a few architectural salvage stores to find out what is happening in the world of recycling. Have such items become harder to find?  Is there a shift in demand or a change in styles?

Our first stop was Ohmega Salvage in Berkeley, CA where we spoke with manager Steve Smith, an expert on period hardware, antiques and light fixtures.
What trends do you see in used building materials and antiques?
Baby boomers are downsizing, 20 and 30- somethings don’t shop retail, so demand is down but the real shift is from older styles to Mid-Century Modern. Everyone wants Mid-Century Modern.

What are people looking for these days?
Younger people tend to look for small pieces such as a smaller piece of art, an interesting piece of wood or a tabletop project. People are gutting Victorians and making them modern. They want clean lines, Mid-Century furniture and Mid-Century fixtures.

How have you responded?
We stock as much Mid-Century as possible but it’s hard to get. During WWII production of housewares came to a virtual halt. The Mid-Century period after the war was brief and things from the 50s were not made to last. Other trends are affecting demand as well. There is a shift to more rental properties rather than “nice” personal spaces. Millennials are pushing back on starting families. All these factors are affecting demand.

Where does Ohmega get their items?
Remodeling, moving or estate sales.

Why not bring in things from other areas such as bringing Mid-Century from LA to San Francisco?
The recycle market is all regional because shipping housewares between markets is too expensive.  As a result, we buy everything locally.

Are Victorian details popular?
We stock tile from the late Victorian era, the 1890s, Art deco and Art Nouveau periods. Anything with color and texture is in demand. A good example is Batchelder’s beautiful Arts and Crafts tile.

What are the most popular items and why?
Furniture from all periods, couches, lights, light shades, pendant lights, including some fixtures originally designed for gas lighting. Also popular are bathtubs, clawfoot tubs and corner tubs from 1900 to 1960. Original bathtubs are in demands as they were made from cast iron and porcelain and are more valuable than modern reproduction tubs made from fiberglass. Mid-Century furniture is the most popular but hard to get.


Our next visit was to Omega Lighting Design where we spoke with Bella Callahan, a long time employee and lighting expert.

Bella concurred with the high demand for  Mid-Century design. In response, Omega Lighting designs and makes their own Mid-Century lighting including Sputnik lighting (see above) and other sleek and modern light fixtures.  Additionally, Omega stocks everything from period door hardware to cabinet and bath hardware including a very cool Mid-Century kitchen in miniature.


Our last stop was to Metro Lighting where we spoke with Lawrence Grown. Lawrence created Metro along with his wife, Christa Rybczynski. Metro creates and sells Mid-Century lighting such as branch chandeliers, orbit pendants and chandeliers and other Mid-Century light fixtures including an interesting Beehive table lamp.

According to Christa, Metro is finding a shift toward modern LED lights that have replaced filament bulbs. This new technology gives lighting a Mid Century look but uses about 1/10th of the energy of traditional bulbs. There are now a wide variety of LED bulbs available which work with a wide array of light fixtures.

Visiting an architectural salvage store can be an exciting trip to another era and is often full of surprises and discoveries. It is a great way to find the best of yester- year and to find new uses for beautiful designs.
Published:
September 7, 2017
By:
David Jacknin